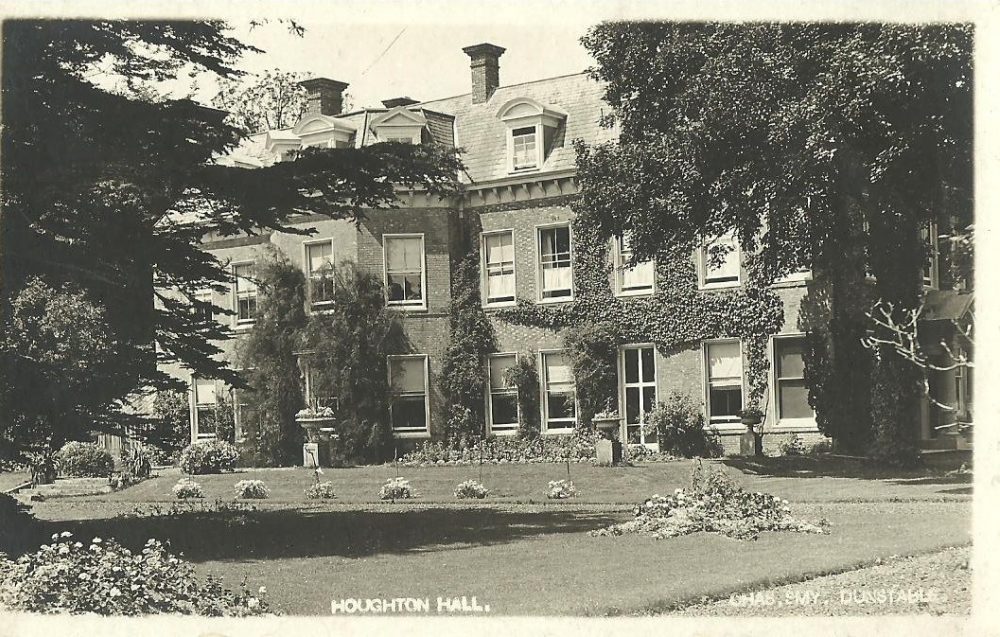 Houghton Hall originally looked south onto estate parkland stretching toward the A505 (since developed for housing and industry). It was commissioned by Alice Brandreth in 1700. The Brandreth family’s association with Houghton Regis began in 1652. The small estate of Sewell, an ancient hamlet that today lies within the town parish of Houghton Regis, was given to Henry Brandreth by Parliament for his support of the victorious Parliamentarian army in the English Civil War.

Henry became an active and respected statesman in Parliament. He was appointed to the Committee of Safety set up in 1659 by the high command of the New Model Army just before the Restoration of Charles II and is mentioned in the famous diary of Samuel Pepys.

Henry Brandreth never lived in Houghton Hall, but in the manor house on the opposite side of The Green from where the hall was built. It wasn’t until 1692 – 19 years after his death – that his daughter, Alice Smythe, bought the land and building of Houghton Hall began. While Alice moved into the hall on its completion in 1700, other family members continued to live in the manor house.

The hall made a major statement, both as a landmark and for the prestige of the Brandreth family in Houghton Regis. The land south of the hall was designed and transformed in the fashion of the great landscape designers of the day, Lancelot ‘Capability’ Brown and Humphrey Repton. The views from the hall over their land would have been important to the Brandreths, and theirs was an uninterrupted one over several miles to Blows Downs, framed by trees.

The Renaissance and Renewal Project

Historic changes in ownership (including council boundaries) left the parkland diminished in size, but the park was awarded a funding bid of £2.2 million to transform the park from Heritage and Big Lottery Funds ‘Parks for People’ grant scheme in June 2015. The programme supports heritage parks to improve their condition, become better managed, and better recorded, interpreted and explained: with a view toward long term sustainability.

The Renaissance and Renewal project has so far restored the vitality of the park by:

The ‘Renaissance and Renewal’ is built on the park’s ‘living heritage’ to protect it for future generations.

Central Bedfordshire Council’s Countryside Access team have a site management plan including maintaining wildlife and increasing biodiversity of the site. As part of the natural seasonal cycle, annual conservation management and maintenance activities include both mowing the meadow and scrub clearance. In the woodland areas a constant balance is managed: between opening up the tree canopy to benefit the people, flora and fauna below, and maintaining cover for resident and migratory birds. The diversity of landscape habitats are a heritage feature of the site and will be enhanced and protected. During the project, consultant ecologists and landscape and heritage specialists, have undertaken habitat mapping, landscape surveys, and breeding bird and bat surveys. Wildlife in the park will be protected and accommodated, whilst landscape heritage features have been identified, restored, explained and interpreted for future generations. The project involved both tree felling and tree planting, but only in order to open up historic sight-lines and to protect certain species from disease.

The Renaissance and Renewal Project was delivered in partnership with a number of organisations:

Houghton Regis Heritage Society worked closely with the park partners on a range of projects to uncover the history of the Park. To find out more about the group, please click here.

Sign up to our Newsletter and receive news on upcoming events.